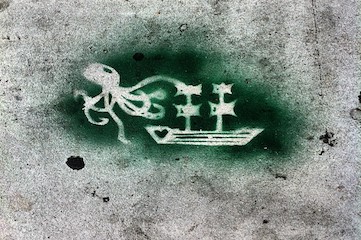 Father was a hunter of mythical beasts. He kept a Yeti rug in the den. One time he sat me on a stuffed Pegasus and couldn’t fathom why I cried and cried.

Mother in the kitchen, scowling over a pot roast. Kraken again? She brandished a frying pan at my father in the endearing way that suggests murder.

At bedtime he tucked me in, asked about any bumps in the night, the tip of his tongue making a single revolution over his lips. It was only after he kissed my brow and shut the door the monsters reared their huge heads and climbed under the covers.

“Shh…” I’d say, cradling the Bogeyman in my lap, the Werewolf tugging my pajama sleeve, whispering, “Me next, me next…”

Todd Dillard‘s work has appeared or is forthcoming in numerous publications, including NANO Fiction, Best New Poets, Atticus Review, Split Lip Magazine, and Barrelhouse. His chapbook “The Drowned Hymns” is available from Jeanne Duval Editions, and his work has been nominated for The Best Small Fictions 2018 anthology.