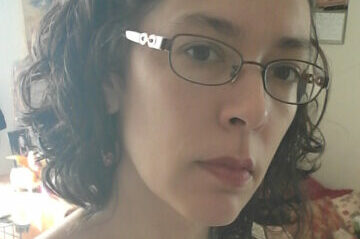 In Ghosts of You, her debut story collection, Cathy Ulrich explores the lives of murdered girls and the impact of their absence on the people in their lives. It’s a haunting book, filled with vivid and often startling prose and the lingering heartbreak of lives interrupted. Purchase your copy here. 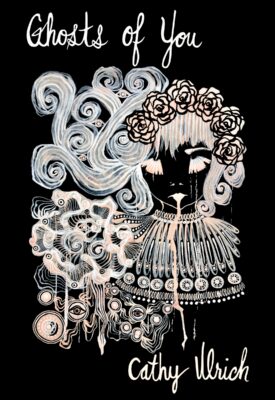 For more from Cathy Ulrich, read her story Like Doll Parts.

Chuck Augello: Ghosts of You is a unique book, a collection of thematically-linked short pieces, all of which begin with a slight variation of the sentence, “The thing about being the murdered girl is you set the plot in motion.” Throughout the book the societal role of the murdered female changes, but always serves as the starting point for other people’s stories. Tell us about the genesis of the book.

Cathy Ulrich: The book started out as one story, “Being the Murdered Girl.” I had read a story where a girl’s body was found in a neighborhood or a town, and it was about the town’s reaction and the writer kind of mused about who the girl had been, but the sad thing is that now I can’t remember who wrote it or where I read it! But it kick-started something in my brain, where I thought, well, that’s the thing about being the murdered girl. You set the plot in motion.

And that story wasn’t intended to be the starting point of a series at all! I thought of it as a one-and-done until, probably a year later, maybe a year and a half, I was reading about Joan Vollmer and it made me so angry that here she had been this talented, amazing person before she was killed, and now she’s nothing but a footnote in “The William Burroughs story,” and so I wrote “Being the Murdered Wife.”

And still I thought it wasn’t a series, just a pair of sister stories, until I wrote “Being the Murdered Lover,” and I realized, “oh, yes, this is a whole thing.”

CA: Some of our readers may be unfamiliar with William S. Burroughs and Joan Vollmer. Can you give us some background about them?

Joan Vollmer was a writer from that era too, Unlike Burroughs, she’s not considered a “primary figure of the Beat Generation,” in part because she’s a woman, but mostly because he killed her by shooting her in the face. They were married and he claimed they were playing a game of William Tell, and the authorities were like, “oh, how tragic, he accidentally shot his wife to death,” and that was it. No more Joan Vollmer, except people saying how tragic her death was for the man who killed her. (He eventually got convicted of manslaughter in absentia, but he never served time for murdering his wife.)

CA: All of the stories in Ghosts of You are approximately the same length, perhaps best described as flash fiction. Was it difficult to keep to that structure? Did any of the stories tempt you to go beyond a specific word limit?

CU: Only the first story wanted to be a bit longer than flash, actually! I wrote a draft with it ending where it ends now, but I felt like it didn’t tell enough of the story, so I added a ton of stuff about the parents getting divorced and the father gets a dog and the detective does something, I can’t even remember what, and I printed it out and read it and realized I had made a terrible, terrible mistake. The story was done when the neighbor girls sneak the cigarettes for smoke signals. I should have trusted my original instinct!

As far as whether it was difficult to maintain the flash structure, after that first story, no. In the past few years, I’ve only written two or three stories that go over 1,000 words. For me, flash is the perfect size for the worlds I’m creating, just little snapshots. Most of these stories settled in nicely between 600 and 800 words, though some are shorter. I’m not sure any are longer, though!

CA: The stories are written with the narrator addressing the murdered female as “you” as the post-murder story is explored. What interested you in using that form of direct address?

CU: It wasn’t intentional to begin with! Like with the robot girl stories, I “hear” the voice in a certain way. In the case of the first story, I heard “The thing about being the murdered girl is you set the plot in motion.” Not “she” or “I,” but “you.” I’m lucky it came out that way, because I do think it is effective — it really brings the reader into the story!

CA: Cease, Cows published your story “Like Doll Parts” earlier this year. When I read the initial submission, I remember thinking “Yes” before I even finished the story. It’s one of my favorites that we’ve published over the years. While it’s not one of the stories featured in Ghosts of You, it shares similar concerns. Tell us how you came to write that story.

CU: Oh, thank you so much! I was so happy “Like Doll Parts” found a home with Cease, Cows. This is another of my “sister stories,” except in this case, unlike most of the rest, I wrote both stories at the same time. The first story, “A Girl in Pieces” was written from the classmates’ point of view as this girl keeps showing up at school with robot parts. But I had originally “heard” the story in second person, so after I scribbled out that version, I quickly jotted down “Like Doll Parts,” looked at them both and said, “oh, hey, it works either way!” Which, for me, isn’t always the case. Usually if I hear a story in a certain tense or point of view, if I try messing with it at all, the story’s soul gets lost. I was very lucky in this case that both the second person and the first person plural PoVs worked for the story I was telling.

Both of the stories were inspired by a manga I read ages ago, Saikano, which is this depressing end-of-the-world tale where the main character’s girlfriend gets turned into a war machine. I hadn’t thought of it in years when I wrote these stories (in fact, I got rid of my copies of it because it is so depressing and I just can’t read it anymore), but for some reason I started thinking of it and wondering “what would it be like for a teenage girl to be turned into something nonhuman?”

In “A Girl in Pieces,” her perspective is much more of a mystery and her classmates don’t understand what is happening or why, but in “Like Doll Parts,” we see her side of things. I think it’s a kind of rebellion. I think she might actually be happy. Even though the mad scientist was just using her for his own ends, she went and made this decision for herself.

CA: Is there a book by another author you’d like to recommend to our readers, preferably something you feel deserves more attention than it may have received?

CU: I love Ruth Joffre’s Night Beast and Other Stories. That has a pair of sister stories in it — I love the sly little reference in one story to another in the collection. Joffre has such a beautiful imagination and a brilliant writing style. This is one of my favorite short story collections!

As a bit of a comic book-loving person, though, I would be remiss if I didn’t recommend one of my favorite comic books too: I Kill Giants. It is so sweet and powerful and moving, and also there are giants.

CA: What’s next? Are there more stories on the way?

CU: A couple of weeks ago, I made a list with things like “nun” and “nurse” and “doctor” and “time traveler” on it. So there are definitely going to be more murdered ladies stories! And I’m always working on something.  I don’t know what I would do if I wasn’t writing one thing or another!

CA: Finally, there’s no shortage of ways to spend one’s time. Why do you choose to write fiction?

CU: Oh, I don’t think I choose to write fiction. I choose to work out every morning and make little beaded critters. I choose to watch silent movies and trashy CW superhero shows. Those are choices!