While “good things come in small packages” is a time-honored cliché, there’s nothing cliched about the “small things” found in Tender Cuts, Jayne Martin’s collection of micro-prose published by Vine Leaves Press.  Haunting and heart-felt, Martin’s stories fold complicated lives in compact narratives, with each story accompanied by a striking illustration. Purchase your copy here. 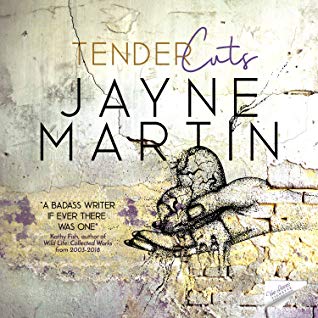 Chuck Augello: Tender Cuts is a unique collection and hard to categorize. How would you describe it?

Jayne Martin: They are moments, peeks into a character’s life when they are at their most vulnerable. In every piece, there is a larger story, but that is for the reader to provide through their own imagination and emotional engagement. Toni Morrison said, “It’s what you don’t write that frequently gives what you do write its power.” Tender Cuts may best be described as a collection of emotional experiences.

CA: What do you find appealing about working with short forms?

JM: There is neither room nor need for exposition. In cooking, it would be the equivalent of making a reduction sauce, paring down each tale to its essence, giving it time to simmer, until you have an explosion of taste in just a tiny amount. I love taking readers to that place emotionally. It excites me to see what resonates with one person, while another will call out something else entirely. Just as no two people experience a painting or a piece of music in the same way, when you get a variety of emotions resonating with your readers, that’s when you know you’re making art. I just happen to like mine in miniature.

CA: With micro prose, sometimes a reader assumes that it was “easy” to write because it’s so brief, but anyone who has tried it knows that the shortest pieces can be the hardest to create. Tell us about your process in crafting these stories.

JM: I usually have to sneak up on a story because I have such a strong left-brain logic/control center. An “idea” doesn’t stand a chance unless I can get it past the guard at the gate to the right-brain side. I do this through the use of prompts – words, photos, or song titles – really anything I can just begin to play with. With words, I often go to the thesaurus to trigger other choices that may lead me down a completely different path. Once I get the first sentence, I usually have the voice and then I’m through the gate, and I bang out that first draft as fast as I can. Along the way, the emotional core of the piece will surface. That’s when the story starts to reveal itself. I never know where I’m going until I get there and when I reach the end, I’m as surprised as anyone else. Then the fine-tuning of word selection and sentence structure begin. By this point, the left-side of my brain has lost all interest and is onto things like grocery shopping and bill paying.

CA: Were you tempted to develop any of the stories into a longer piece?

CA: Each story is accompanied by an illustration. Was that always the intention for the book? How do you think the illustrations add to the book?

JM: It was the intention from the moment I conceived of there being a collection at least a half-dozen years ago. There were a couple of reasons. From purely a marketing point of view, there are a ton of collections out there. I wanted mine to be a little bit different. More than just a collection of stories, I wanted to present a total concept. The stories absolutely stand on their own without the illustrations, but our brains are wired to respond emotionally to imagery. In some cases, they also add a light touch to what are, admittedly, some pretty dark pieces.

CA: In my reading of Tender Cuts I detected a few recurring themes and wondered if they were intended. Do you see any of the pieces as thematically related?

JM: It wasn’t so much intended as discovered after the book was together. A theme of abandonment emerged for me. All these characters are pretty much on their own in dealing with their wounds. I was an only child of divorced parents and my earliest years were not the most stable. I remember feeling that the adults in the room were clearly not in charge. That’s kind of a big thing for tiny shoulders. Though now I’m the happiest I’ve ever been and see humor in just about everything, I believe there is still that young child in there dealing with some heavy stuff and that perhaps influenced the work.

CA: Who are some of the writers whose work inspires you?

JM: For gorgeous language, Helen MacDonald’s “H is for Hawk.” It took me forever to get through it because I kept stopping to reread her remarkably beautiful sentences and asking “How did she do this?” So beautiful language draws me in. Obviously, Toni Morrison’s work sends me into euphoria for that same reason. For pure storytelling and multi-dimensional characters, Flannery O’Connor should be required reading for anyone even thinking of trying to write. For sharpness, control, and inventiveness, Raymond Carver’s work is like that of a master sculptor. Joy Williams’ micro masterpiece, “99 Stories of God” – okay, everything by Joy Williams. In non-fiction, if you read one piece, read Jo Ann Beard’s “The Fourth State of Matter.” The best writing advice I ever read was from Jennifer Egan who said, “Read at the level you want to write.” Because I learn primarily through osmosis, that’s what I attempt to do.

CA: What’s next? Are you continuing to write micros?

JM: Next I just want to get back to writing. I had no idea of the amount of energy and attention required to get a book before the reading public’s eye. Between the book launch and my “real life” job as a paralegal, it’s been a slow writing year. But in November I’m going to participate again in Nancy Stohlman’s Nano Flash Challenge – a new prompt each day. That always fires up the engine. Then at the end of the month I take another workshop with Meg Pokrass who always manages to get some wonderfully weird stuff out of me.

CA: Finally, there’s no shortage of ways to spend one’s time. Why do you choose to write fiction?

JM: Writing fiction allows me to connect with others on an emotional level that is not always so easy for me otherwise. It gets me out of my brain and into my heart.

Jayne Martin’s writing career began with a twenty-year stint writing movies-for television. Her credits include “Big Spender” for Animal Planet and “A Child Too Many,” “Cradle of Conspiracy” and “Deceived By Trust” for Lifetime. Her book of humor essays, “Suitable for Giving: A Collection of Wit with A Side of Wry,” was published in 2011. She has been the recipient of the following honors: Fall 2013 Women-On-Writing Flash Fiction Winner; 2016 New Millennium Writings Flash Fiction Finalist; 2016 Vestal Review VERA Award; 2017 Pushcart Nominee; 2018 Best Small Fictions Nominee.

She currently lives near Santa Barbara, California where, when not writing, she rides horses and drinks copious amounts of fine wine, though not at the same time. Find more information at www.jaynemartin-writer.com