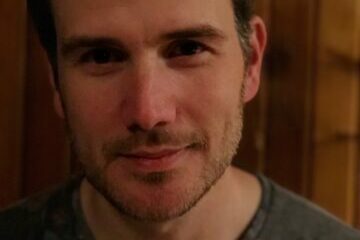 Not Everyone Is Special, the debut collection by Josh Denslow, introduces readers to a compelling new voice in short fiction. Frequently comic and often poignant, Denslow’s stories shine with originality and energy. Purchase your copy here: Not Everyone is Special.

In a recent interview, Denslow shared his thoughts with Cease, Cows.

Chuck Augello: If you came across a stranger in a bookstore holding a copy of Not Everyone is Special, what might you say to entice him or her to read it?

Josh Denslow: I’m an outgoing person by nature. I’m always down to chat. But there’s something so intensely personal about my writing even though I don’t write about my own experiences. I get nervous doing readings and just talking about my book. I think if I was at a bookstore and someone was holding a copy of my book, my first instinct would be to look away. I wouldn’t want to see them make the decision. Is it going back on the shelf or is it making the trek home? But let’s say hypothetically, for this scenario, I was forced to go up to this stranger holding my book. I’d probably say “I’ll buy that book for you.”

CA: What were some of the challenges in putting together a collection?

JD: The biggest challenge for me was deciding which stories should be included. I had a good ten years of stories and I began searching for themes. I wanted the collection to flow even though I’d never set out to write a collection. I hoped to mix up different styles without breaking an overall theme. It was pretty clear I liked slackers and people struggling on the fringes. So I jettisoned some stories where people were successful or had their act together. One of my favorite titles was NOT EVERYONE IS SPECIAL from a story I had published in CutBank many years ago. It suddenly hit me that a lot of my stories could have that title as well. I decided to use that as my litmus test. If a story could feasibly be titled NOT EVERYONE IS SPECIAL, it made the cut. It turned out to be the best way to assemble the collection. So after that, it was just finding the right order!

CA: How was the experience of revisiting stories that you had written and published some time ago?

JD: It was really fun reading through those old stories. I was pretty generous to myself. I could remember where I was in life when I wrote them. Plus most of the stories in the collection had been previously published and spent some time with editors. The most interesting thing was just how much technology had changed in the last ten years. Leland, my publisher, pointed out a few places where my characters were rocking out to CDs and other outdated things. Most of my editing was spent trying to catch that stuff. I did clean up some language, but for the most part, I tried to let the stories remain as they’d been. I don’t mind a little imperfection or rough surfaces. Fits my characters.

CA:  Do you have a favorite story in the collection? If so, which one and why?

JD: I think my favorite story is possibly the title story, “Not Everyone is Special.” I love giving people superpowers in my stories, and in this one, I flipped the script. Everyone had a power except for my main character. I loved that he was searching for what made him special in the hopes that it might fix the things that were going wrong in his life. And of all my stories, it has the most hopeful ending. I like that.

CA: One of my favorites in the book is “Dorian Vandercleef.” Can you tell us a bit about it?

JD: “Dorian Vandercleef” is the most recent story in the collection. I’d stopped writing short stories for a few years and had spent most of my time writing a novel and trying to get an agent for it. It was a grueling and frankly depressing time and nothing ever came of it. I was ready to have some fun again, and I saw Tin House was doing that PLOTTO contest where they supply a prompt each week and then you can submit the stories you come up with for publication. “Dorian Vandercleef” came from one of those prompts, but for the life of me I can’t remember what the prompt was. I spent a bit of time revising it and I sent it off to Split Lip and that was around the time I found out 7.13 Books was going to publish my collection and everything got a little bit brighter. The wonderful Maureen Langloss at Split Lip worked with me on another draft and I love where it ended up. A lot of people have told me it’s their favorite story in the collection and think that’s really cool! I think it’s also worth noting that one of my other PLOTTO stories called “Luck” ended up being published by Wigleaf and it has become the basis for a new collection of stories that are all thematically linked. So I guess I owe a big thank you to Tin House!

CA: Many of the stories are quite funny.  Is this your intention when you start writing, or do the stories naturally develop their comic tone?

JD: I don’t usually sit down and say “I’m going to write a funny story!” That being said, I do hope they become funny as I go along, but it’s definitely not something I force. For me, comedy happens when the characters take over and show me where the story is going. I rarely know what’s going to happen when I start something new. My drafts are all about exploration. Sometimes on a final pass, once I have the tone and the story down, I can punch up dialogue with the express purpose of making it funnier. But everything else has to be in place first.

CA: How has your experience as an editor at Smokelong Quarterly influenced your work?

JD: The most interesting thing about SmokeLong has been seeing how many good stories we get and how many of them we aren’t able to publish. It’s really humbling. Everyone should read for a journal so they know how hard it is! I also love my SmokeLong family and it’s a really supportive and generous group. I don’t think I would have made it through some tough patches in my writing life without them. I don’t know how much it has influenced the actual content of my work, but working at SmokeLong has kept me balanced and in the literary community when I might have otherwise bailed.

CA: You’re also a musician, playing drums with the band Borrisokane. Does working as a musician influence your writing?

JD: I like to think that playing music helps me with rhythm. Playing drums specifically is very rhythmic of course. For me, playing music is a group activity, and writing is very solitary. I’m not sure that music influences my writing, but I do know that I need both to function. They are linked in some way that is hard to articulate. Both are a part of the creative me, and both need to be generating content to keep me on track.

CA: In the Acknowledgements, you mention workshopping these stories at the UCLA Extension Writers Program. How does the workshop experience benefit you as a writer?

JD: I think when I was starting out in fiction writing, being in a workshop environment was wonderful. I met some great writers and it was just as helpful to discuss their work as it was to have mine discussed. I did try to get into MFA programs for a while after my time at UCLA Extension, but I was rejected six years in a row by all the programs I most wanted to attend so I eventually gave up. I have some friends that will still take a look at my work, and my wife is my main reader, but I haven’t been involved in an actual workshop in a long time. I do miss the camaraderie of it, but I’ve found that I don’t need a workshop deadline to keep me generating material.

CA: If you were given space in The New York Times Book Review to promote a writer or book that you feel deserves greater attention, who or which book would you choose, and why?

JD: This is a tough question! I know so many writers coming up now that absolutely deserve greater attention. And I’ve read tons of great books that I think everyone should read. And there are books that have quietly gone out of fashion. But after much deliberation, I think I’ll go with Scarlett Thomas. Her books are full of huge ideas and metaphysical musings and terrific character dynamics and all done with a light touch and a dash of humor. OUR TRAGIC UNIVERSE was an important book for me as I launched into my new novel. I love the pacing and the way Thomas isn’t scared to follow an idea, even if it is leading the reader astray. It’s a wonderful book that should be read by way more people.

JD: I’m almost done with a new novel about the consequences of youthful decisions. It is maybe the weirdest (and definitely the longest) thing I have ever written. I’m also wrapping up a new thematically-linked collection that will be fully illustrated. I’m so excited to see what the future holds for these two projects!