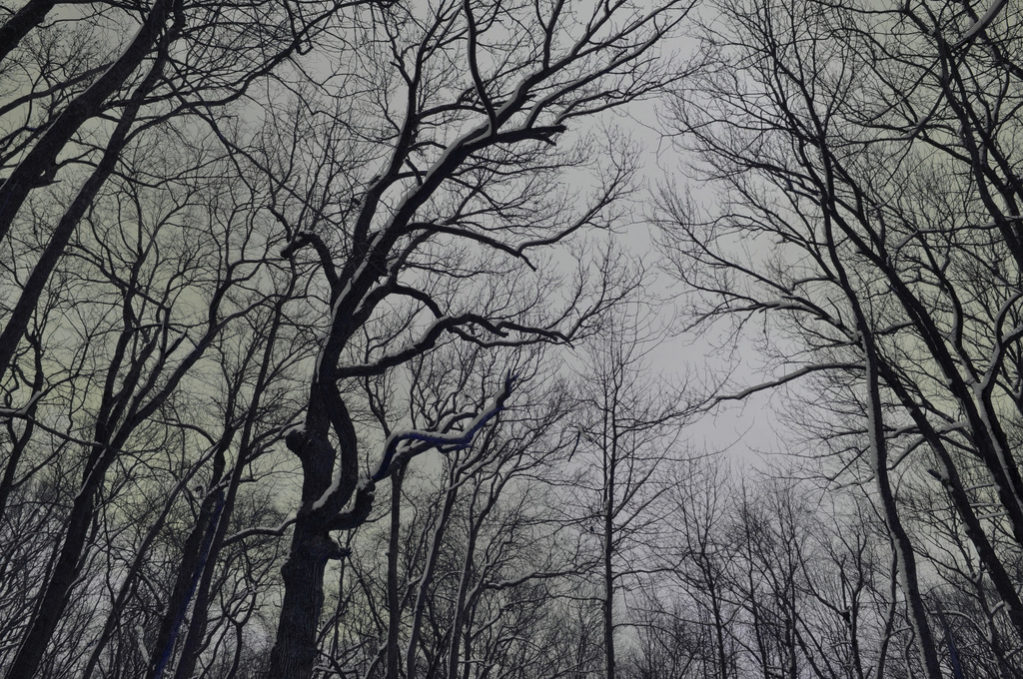 It’s December–the best time of year to hide. As children, my sister and I loved the afternoon hide-and-seek of winter months. The sky like a popsicle, cold coaxing snot from our cherry-tipped noses. We lived on five acres choked with douglas fir, alder, and hemlock. Our bodies were slim as corn stalks, easily obscured by trunks. We’d skitter from tree to tree, yelling Olly, olly, in come free, Ready or Not, here I come, until our mother called us in, our hair scattered with leaves, sticks, and spiders.

In the kitchen my father makes breakfast.  Outside the sky is smeared with night, so when you look at something you can’t be sure you saw it right. He cracks eggs into a pan, watches their translucence whiten, flips them when he’s sure the yolk can handle it.

When he clunks the plate on my placemat, a face made of fruit halos the meal. Toast, cut into slim strips, surrounds the yolk. I stab it with a strip and the membrane pops, quiet as a swallow. He kisses me on the stripe of scalp exposed by my braids and it sounds like something quick-ripped.

Think about your birthday, he says. He glances at the band-aids on my fingers. The skin at the edges bulges bright. He gets to packing his lunch: two tuna sandwiches, pickle, chips, Snickers.

In two days, January 1st, I’ll turn eighteen. Somewhere, or nowhere, my twin will turn eighteen on December 31st.  We were born five minutes apart in two different millennia. This was supposed to be the most interesting thing about us. Something to share during first-day ice-breakers while other kids bent elbows backwards, flipped eyelids, flopped tongues under-side up.

It’s my morning to feed the cows, so I slip on boots and head to the barn. Ghost watches me dump grain at each stanchion’s slot. I palm a handful, open my hand under her nose. She swipes it with her tongue, probes each nostril after she swallows. It’s been eight years since my father hoisted her from his truck-bed and presented her to my sister and me, ours to care for until butcher day. She was small enough to hold as we argued about her name: Snowflake, Cloud, Daisy, Pearl. My father shut us up when he said, She’s white as a Ghost.

After the cows are fed, I head out on my walk. I tug off my gloves, bring my middle finger to my mouth. I know to make the process last—to slowly dislodge the fingernail in strips thin as eyelashes. By tonight, after weeks of slow work, this nail should finally reach its half-moon. My jaw aches to get it there, but I resist. The throb lasts longer if I take my time.

After my sister was taken, I didn’t enter our woods for years, but every day I mentally coursed the system of trails we’d created. I imagined twisted ankles, scratched the blotch-mouths from stinging nettles, bled tight bulbs from the scrapes of branches. When my mother left, I began walking it again for real. I’d focus on my simple motion—the give-take of quad and hamstring, the pop of joints, the tick-tock of arms swinging. It took years, but I now enter the clearing where I last saw her daily. A counselor told me trauma can be dulled through repeated action. The body learns nothing bad will happen if nothing bad happens, even when the worst thing once happened.

A slobber, insistent bellowing tells me the neighbor’s bull has moved from their barn to their field. It will stare at our cows until it’s lured back into the barn at sunset. My father always said to stay away from it, that once it decides what it wants no fence will stop it.

One day during winter break my sister and I packed hot chocolate and snickerdoodles and ventured further into our woods where the trees were better for hiding. The world was bright with snow and our bodies buzzed as we ate cookies. At first, we thought the man approaching was our father– he wore the same Carhart jacket and Levi’s, even a hat with ear flaps like the one we’d bought our father, but then he spoke.

We had a plan for strangers: run. But the gun was there before we could scatter. He said to take off our coats, pressed the gun to the back of my head then my sister’s. He rubbed his hand over my chest, flattening my breasts, then moved to my sister. We’d compared—I knew hers were nothing but little hard knots. The gun was again on me and he told me to run. I looked back once—my sister slung over his shoulder, her hands a tantrum against his back.

My sister’s disappearance saved Ghost from butcher day that spring. Instead another cow was shot. I watched from my window, felt the thud of its body in my throat. I waited to cry, vomit, or for an eruption in my stomach, but nothing. I watched the hooks pierce its hide, the crink-crank of the pulley lifting. The throat to anus slit, the steaming piles of guts spilling onto the tarp.

I’ve relived her taking a thousand times, revising it when I’m gut-punched with guilt. Sometimes my sister tells me to run, sometimes she begs me to stay. Sometimes I stay and he takes us both. Sometimes, my body is his type and my sister runs. Sometimes I think she’s the lucky one. Those are the days I can’t resist and my fingertips end up bright and bloody as boiled beets.