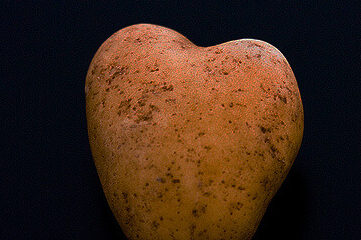 You are a small potato. Bigger potatoes are dancing to fantastic music in outer space, but you can’t go there. You’re a simpleton blown to bits by the cut and thrust of superior tubers, by the gravity of dancing. Your zen is here in the grocery store, moving through life as a good or service, a supply to some higher demand. You hope you won’t be devoured, but it’s your reason for existing. You can grow eyes, but you will never see. At least avocados are prodded, poked, squeezed. Nobody squeezes a raw potato. Despite this, you hope you’re not defenseless. The produce aisle is replete with fitter protection: Coconut shells, cantaloupe rinds, banana peels, the tannin-rich skins of grapes. Your bag blessed with holes is breathable, but isn’t transparency a bitch? Look, your eyes are like my fingernails. Try to grow—not literally because you’re dead, but try to expand your mind; try to picture a safe space, somewhere you’d like to be: In a bag or bushel, a frying pan or baking sheet. Forget about dancing. You’ll never make it to your dream of commingling with the bigger, sexier potatoes in the starry coolness of outer space. It’s nice to have dreams. Maybe next time. Look: A human holding a paring knife. It’s time.

Originally from Denver, Brian Robert Flynn is currently breathing the fiction and poetry of Washington, DC. His writing can be found in (or is forthcoming from) Clarion, Jelly Bucket, Amsterdam Quarterly, Glasgow Review of Books, Southword, and The Moth.