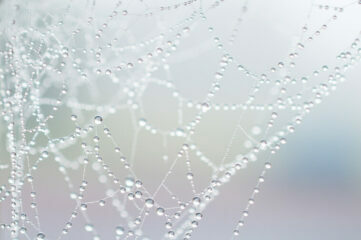 I was good at it, I want that known. Even if I was only called after all the nicer, neater neighborhood girls said no. Even though I made a dollar less than my lawn-mowing brother. (“Well, boys do work harder than girls. Everyone knows that,” he’d tell me.) I was loved—by children, pets, houseplants. I sang to them you see, to the houseplants, with the kids and dogs in chorus. Nobody else thought to do that. I was a good influence, no matter what they say.

Once I helped the two sisters down the street—the Griffin girls, with the born-again stepfather—photoshop their faces onto Mt. Rushmore. We took out Teddy and Thomas Jefferson. Then we put a triple rainbow across the Dakota sky, blossoming out of the foreheads of George and Abe. “One for each of us and one for mom,” the sisters explained to their stepfather and mother, showing them our creation when they got home from couples counseling at the megachurch. “Where’s mine?” their stepfather said. “You said you don’t like rainbows,” said the other sister. The stepfather showed what we’d done to his wife. “It looks weird, don’t it, Anne?” “It looks perfect,” I said. It was a whisper, really, but loud enough to unnerve the silence as the mother dug in her purse for her keys to take me home. In my driveway, she handed me a few bills, put her hands back on the wheel, looked straight ahead. “I meant well with the picture,” I tried telling her. “We’ll put a dove or cross or something in it next time,” I said. But there never was a next time. Not with them.

Two blocks down I sat for the homeschooled triplets, the Paul boys. I showed them how to feed the spiders living beneath their front stoop by hunting for dead ants and expired flies to throw into the webs. I admit this was a little unconventional. But I had a point. “Name the flies after your bullies,” I told the triplets. “It’s called catharsis. Here, I’ll show you.” And as I threw I’d name my tormentors at school—a boy who lifted my skirt as I walked down the hall one day and the boys who laughed, the girls who’d been spreading rumors about me since I started growing breasts at age 11. “We don’t have bullies,” one of the triplets said. “We don’t go to regular school,” said a second. “None of the other babysitters have ever done this!” said the third. He was the most tradition-minded of the three. He told his parents about our web game. They only nodded at the news, exchanged glances with each other, and with me, as if all this wasn’t surprising to them.

That night their father wanted to walk me home and told me he’d pay me next time. I didn’t like the sound of either suggestion. “I can walk myself. It’s no problem,” I told him. “It’s not safe,” he told me. “It’s two blocks,” I said, though I wanted to say I felt safer without him. He always stood so close to me, and his wife always seemed to be standing right behind me, a tall, thin, hyper-alert woman, all eyes and elbows. They had a way about them that even when they left me alone with their kids, I felt I could never enjoy enough distance from them. “Suit yourself,” he shrugged and let me out the front door. As I was going down the stoop, I heard him say, “Come to think of it, I’ll see your father tomorrow. I’ll hand your money off to him.” I turned to face him, to ask him why, but he was already closing the door. Just before the door clicked, I heard him tell his wife: “Don’t ever call that girl again.”

In the glow of the full moon, I caught a glimpse of the spider webs, empty of my well-fed friends and fragile-looking in the swaying of a night breeze. I ran across the lawn, freshly mown that morning by my brother, and all the way home, wishing the night could only be as dark as a black widow, blank as the webs I’d just left behind. At home I shut my bedroom door against the questions of my family and the memories of the Griffin girls, the Paul boys, and the kids at school, swearing off babysitting and other people’s children forever.

René Ostberg is a Chicago native who still resides in Illinois. Her writing has appeared at Literary Orphans, Drunk Monkeys, Thank You For Swallowing, Rose Red Review, The Writing Disorder, and other places. Currently, she serves as an editor at Tiny Donkey. For more information, visit her website: reneostberg.wordpress.com.