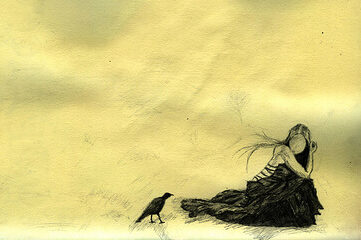 Even before our brother poisoned us, we lived in the woods, only then we’d each been alone. And we had to hunt and hide, to survive. It was a difficult life, lonely. But we’d learned from our mother to trust no one.

Then our mother died, and our brother opened a window in the house where we all were born and called to us. “Sisters, you can come out now.”

We weren’t so sure. Our brother had lived with our mother all that time, after all. And none of us had seen each other in years.

But the heart wants, even when it knows better.

So we crept back gingerly, rolling our feet softly on the earth, our eyes scanning for traps.

As we neared the house, the landscape shifted. The few remaining trees were studded with prickly balls of mistletoe. When they kissed the trees, they latched on and didn’t let go. They bored inside the trunk to the xylem, to steal the trees’ water.

Black birds with red eyes flitted among the trees. Phainopepla. They ate the mistletoe’s berries and spread the sticky seeds from limb to limb by way of their shit.

“What about you?” our oldest sister said.

He said, “I’m the one who cared for our poor, dear mother.”

“Not so poor,” our oldest sister said.

“Not so dear,” the second oldest said.

A phainopepla flew in through the open window then and dropped a white berry onto the black Formica. It looked like a pearl onion. Our brother tried to eat one once at Christmas, when he was a toddler, but mother slapped it from his hand, said they’re poisonous.

The bird flew up to the rafters of the house. There hanging from the wooden beams were three balls of mistletoe in a neat row. White berries dotted the clumps like boils.

Our brother said, “Mother died of a broken heart.”

Our oldest sister said, “I heard she died of cancer.”

He said, “Your ingratitude tore a hole in her heart that let the cancer in.” He picked up the berry, held it up for inspection, and smashed it between his fingertips.

Our brother announced it was time for dinner.

At the table, he ladled a white broth into four black bowls.

We were cautious. We waited for him to take the first bite. He did.

As we ate, he retold the story we’d all heard countless times: that our grandmother sent our mother into the woods alone when she was just a girl. Unbeknownst to mother, grandmother dispatched a wolf along after her, promised her to the wolf. But the wolf swallowing her was not the awful part, mother always said. In fact, she was never so content as she was inside that wolf, and that’s why grandmother slit open the wolf’s belly and wrestled mother from him. Because she wanted mother to have no pleasure in life.

Our oldest sister laughed. She said, “The only thing I take from that story is that mother hated us before we were even born.”

Our second oldest sister said, “She drove us into the woods too, you know, only we went voluntarily, because the woods were more hospitable than this place.”

I said to our brother, “Why did you call us back here?”

Another phainopepla flew into the house. It joined the first one in the rafters.

Years ago, when I left, our brother had been thirteen and wild. He put snakes in my bed, threatened me with knives. All that while, mother coddled him and defended him. He’s just a boy, she said.

I’d heard over the years that our brother had grown out of that wildness, as though it had been a skin he’d shed. But as I stared across the table into his eyes, which were beastly and rimmed in black, I saw that he’d discarded nothing. And how could he have? Thirty-two years he’d lived with our mother.

I knew then that he’d poisoned us. All these years, he’d been building his immunity, for this moment.

I said, “You always believed you were a victim. Just like mother.”

Now my sisters and I lay still on the damp earth as the trees tap our arteries. Drink us in. Balls of mistletoe hover above the husks of our bodies like unwieldy halos. I think I know now why mother didn’t try to escape when the black of the wolf’s mouth stretched wider and wider to take the whole of her inside. It felt like love.

Michelle Ross‘s fiction has appeared or is forthcoming in The Adroit Journal, The Common, Cream City Review, Gulf Coast, Hobart, Necessary Fiction, Paper Darts, SmokeLong Quarterly, Word Riot, and other journals. Her story collection was runner-up for the 2016 Juniper Prize. She serves as fiction editor for Atticus Review.