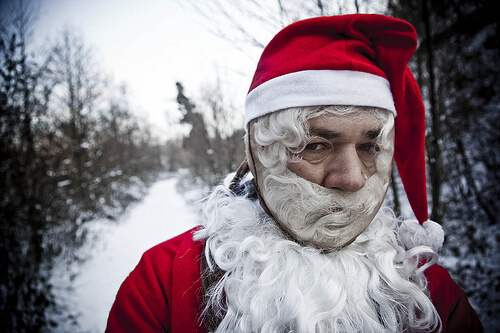 You make stupid-good money as a Santa Claus. Sure, there are parents who scan you up and down for any trace of child molester and there are kids who spit on you. But you’d be surprised how many children are just ecstatic to meet a guy who brings them presents without asking for something in return.

I started the whole Santa Claus thing after my ribs were broken and I could no longer work construction. The cops still don’t know where the person is who broke those ribs.

Here’s how it all went down. I had just moved into my new house when someone knocked on the door a bit more vigorously than usual. It was a rather large guy with a dubious stance but I tried not to make any snap judgments.

I told him there wasn’t any Frank who lived here.

He just scoffed.”I know Frank’s here. I need to talk to him.”

“If there’s no one else here then you must be Frank.”

I insisted that I wasn’t Frank, that in fact my name was Lancaster, and he looked at me like, that has to be a bullshit name, and I couldn’t really disagree with him there, but still I had to try. He stepped into the house.

Then he got physical. I can’t remember the details but I know I couldn’t see out of my right eye very well, that I was somehow lying on the floor, and that I desperately wanted to be someone named Frank just so I could reveal whatever information this guy needed.

“I’m not him, I swear,” I heard myself saying while blood filtered from my nose into my mouth.

I’ve tried to develop my own theories since no one else seems to be. I couldn’t get much from my landlord about the previous tenant, but I imagine that wall of a man really did have the wrong house. He might have been looking for the house diagonally across from mine. Too many people live there to know for sure.

These neighbors leave for weeks at a time, the house looking more depressed in its shabbiness when no one is there to enliven it. Then they return and have these large bonfires, dancing around the fire with great flaming torches, asquirm with hallucinogens, looking elaborate and exotic. They also like to dance around what I refer to as the maypole, but what is actually a large stake in the ground that they tied strips of old undershirts to.

They have names like Drake and Crystal and Heaven; names that reveal a lot about their parents.

Moving to this absurd block became a necessity when my wife divorced me. We had eloped when we weren’t all that young and probably should have known better.

The first thing I noticed about Bridget was her hair. It was always stringy and pieced apart like a child’s. Like if she tried to pull it up or contain it in some way, it would just fall right back down.

I guess her hair reminded me of the woman who worked in the video store in town a decade or two ago. She was in her mid-30s with a glass eye, articulate and seemingly in her prime. Her light brown, crimped hair fell around the edges of her frames, the right lens purposefully clouded to hide what lay behind it.

I always wondered how someone like her could have ended up there, handing over chunky VHS tapes to kids with sticky hands. And I wondered how Bridget had ended up with me, too. On one of our first real dates I started rubbing her arm and she reciprocated, thinking I must find it comforting or I wouldn’t have thought to do it. After a couple of minutes she noticed she was still rubbing my arm and I had long since stopped. This could be an accurate summary of our marriage.

Naturally, when things ended I fell into a bit of a slump. I knew I was no better and no less selfish than suicidal people. I had entitlement issues and some depressive spells occasionally, but the only thing that made me different was curiosity. I expected life to be shitty, but I was still curious about what that shittiness would look like. How it would play itself out.

Bridget now lives in a clean, suburban neighborhood with its own park. She has a very white house with all of the interior walls painted a very striking red. The contrast is intense, like an overly pale person is trying to consume you when you walk in.

Becoming Santa lifted me up out of the confusion of being both newly alone and mauled by a stranger within a few short months. Let’s just say I already looked the part. I was a little nervous leaving the construction field, but after the assault, sitting in a comfortable chair wearing red pajamas was as big and sexy of an idea as the fear telling me not to do it.

I started in malls and switched to private parties and corporate events after I got smart.

There are training courses and conferences all over the country for those interested, but you can learn a lot just by staying alert on the job. I signed up for all the major toy store catalogs so I know what I’m talking about with the kids. You learn pretty early on that if they ask for a pony or something equally outrageous, you’re supposed to say “I’ll see what I can do,” rather than making any promises.

Plus, beard-dyeing is actually tax-deductible.

Of course there are downsides, like anything. If you look like Santa and you’re strolling along with hookers on each arm and a crack pipe in your mouth, and a young child happens to see you, who knows what will happen. Even if you’re dressed in regular clothes, they can spot you. They know. So I’ve had to quit smoking because I don’t want to be responsible for the youths of America keeling over from lung cancer.

After a particularly rough day of loud shrieking in my ear and urine, vomit, or some other excretion from the human body soaking my suit, I open my toilet lid and search around for my emergency pack of cigs taped inside. And they look like cigarettes that one could simply smoke. I just crack a window.

Since becoming divorced I’ve attempted dating as a way of making it seem as though I’m putting myself out there. Dating is like seeing an object shining in the sun and leaning over to see it’s only a penny but you’re already leaned too far over to stop. As I went to see if it was worth it, I found out it was definitely not worth it.

Somehow I’ve become involved with this woman Delia who blows her nose exactly like how my uncle used to. It’s very loud and boisterous but that just makes it seem that much more genuine, almost imploring in its sound. I say “involved with” because I think it sounds classier than just a plain old relationship.

Now my phone buzzes angrily against the wooden kitchen table, amplified by the hard surface. Now in my nostrils there is only the acrid burn of the processed sardines in her caesar salad dressing. Now there is only insert sentiment here.

Delia and I met through Lenny, who is unfortunately one of the elves I call up frequently for Christmas parties. Lenny’s glasses are always so noticeably smudged that I don’t know how he stands it, let alone how he can see. As if he not only accepted the results of the broken earth but embraced it. And what exactly is he doing to get them that way in the first place? Delia told me he’s a compulsive liar who licks people’s shoes in movie theaters and I believe it.

I asked a kid what he wanted for Christmas last December and he paused a long while, then sighed and said, “Just a decent night’s sleep would be noice,” and I thought, I don’t think I’ve heard a better answer.

When actors break scene they have different rituals for transitioning out of character and back into themselves. I feel the need for that also. I like to remember that I’m not a bearded, overjoyed myth but a regular human male, and there’s a relief in that I can’t explain.