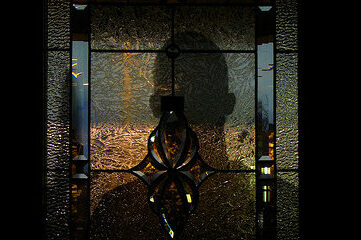 The intruder enters through the unlocked door without warning, wearing a ski mask and a cerise sweatshirt that says Bates College. I think that’s odd: Bates is where my husband and I first met, a dozen years ago and a thousand miles away. The man climbs on top of me before I have a chance to call for help.

He clamps his gloved fingers on my jaw. “No talking.” I nod so he knows I understand as he tethers my wrist with zip-ties. I tug at them to test their strength and their plastic teeth bite into my bone.

“What are you going to do to me?” I whisper.

“What do you think?”

For a moment, fear takes me and I disappear into it. I don’t think anything.

He hikes my nightgown over my waist and hooks his thumbs around my panties, yanking them off with a single tug. Then he folds them neatly and presses them twice to smooth out any wrinkles.

The intruder slaps me across the mouth, not too hard, but it catches me by surprise. Then he freezes. “Oh, God, you’re bleeding.”

I tongue my lip and taste blood. “I don’t care. Just get on with it.”

But he climbs free of me and peels off his ski mask. “No, not without a safety word.”

Safety word. I bet he learned that doing research in online forums.

That gets my husband to fuck me, a real hate fuck, and he leaves me zip-tied for an extra hour. When he cuts me loose, he asks, “Is that what you wanted?”

But he knows what I wanted.

The bruises on my wrists last for a week.

“License and registration,” the policeman says.

I’ve been driving the new car. I don’t like it as much as the old car. It’s got more amenities, like all-wheel drive and side airbags and seat heaters, and it’s got a very high rating from Consumer Reports, but I don’t think I’ll ever grow to like it.

The policeman seems embarrassed when he reads my name, and he hands back my papers without writing a ticket. “You should slow down,” he says.

I see him everywhere. I see him around the house and standing in the yard, and most of all I see him in the backseat of the car, peering at me through the rearview mirror.

In the moment, the seeing of him seems perfectly normal, not like a ghost at all. He’s where he belongs. He belongs around the house and in the yard and in the backseat of the car. Everything is right. For a second, I forget he’s ever been gone. Then he disappears, and it’s like he’s been taken from me all over again, and I’m left sniffing at the air for any lingering scent of him.

The stranger’s got a thick beard and angry eyes and his pants are dirty canvas and he smells like someone who works outside. After the second drink, he’ll invite me back to his place, and we’ll climb into his truck and drive together up a rutted road, away from everything, to a musty hunting shack he keeps in the woods, the place where he keeps his knives and saws and shovels, the place he sometimes lures innocent women who then disappear without a trace.

Which is exactly where I want to be.

“I think you’ve already had enough to drink,” he tells me, before grabbing his beer pitcher and disappearing into the next room.

I mouth the name to feel the shape of it on my lips, but I won’t say it out loud.

I go room by room through the darkened house, back and forth, hoping to spot him out of the corner of my eye. I open the windows and peer into the yard. I play a few keys on the piano. I run my finger along the spines of his favorite books and topple them to the floor.

My husband is at work, or maybe a movie, or maybe that was last night.

The front door is wide open and I stand in it, my nightgown wisping like fog. People on the street turn to look. “Come in,” I say. “All manner of violence is welcome here.”

But no one accepts the offer.

If I could go to where he is, I’d have gone already. But I don’t belong where he is. Where he is, it’s a place for innocents; everything is still pure and unrealized; nothing turns to disappointment; flowers don’t wilt on the grave; cars don’t slip; mothers protect their children; there is nothing to want. I belong here, nowhere, wanting, wanting nothing, wanting nothing more than something to shake me alive, or shake me to death: an intrusion.

Christopher DeWan has published over forty stories in journals including A cappella Zoo, Bartleby Snopes, DOGZPLOT, Jersey Devil Press, JMWW, Juked, Necessary Fiction, Passages North, and wigleaf, and his story collection Hoopty Time Machines is forthcoming from Atticus Books. He has been nominated twice for the Pushcart Prize. Learn more at http://christopherdewan.com.