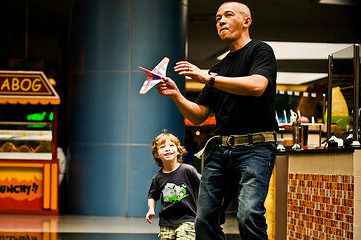 His kiosk is just outside the cheap jewelry store, a lone island dividing the tireless stream of people marching by. It is packed with blinking LED lights and mechanical whirring, a beacon in the gloom of the mall’s creeping motel scent. He demonstrates his wares—flying a remote control helicopter over the heads of the passing crowd, guiding a miniature red Mustang through the endless forest of legs, bravely captaining a tiny boat across the indoor fountain through intermittent air raids of loose change and jets of chlorinated water. Your mother never lets you look too closely at his stand, afraid that you’ll pitch a fit in the middle of that overcrowded mall and squall for one of the cheaply made toys that will most certainly end up just sitting on a shelf in your room after a few days—forgotten or broken. The man is nameless, ageless, voiceless.

He is there when you get your ears pierced at the cheap jewelry store by a pimply teenager chewing cinnamon-flavored gum. His little remote control helicopter whizzes by the storefront just as the gun punches a hole through your earlobe. Your mother notices that the rhinestone glinting in that ear is a little off-center, but she doesn’t say anything to you. You see him and his little red Mustang the first time your father lets you go to the mall with your friends—an independent woman at the ripe old age of eleven. He is there when you visit the over-priced department store at the end of the mall in search of a prom dress, and he is there when you come back a few days later after breaking up with your boyfriend to return the sea-foam green strapless ball gown you bought because prom-is-just-a-societal-construct-and-I-am-independent-of-those-influences-thank-you-very-much. You use the money you got back from the dress to buy yourself new shoes and a haircut. He’s there when you walk past those storefronts with your mother for the first time in years, searching for bedding for your college dorm—oh look, maybe there’ll be a sale, it is a back-to-school special you know.

He is there, until one day he isn’t. His stand has been replaced by a display case of Dead Sea skin products manned by a woman effervescing about natural exfoliation. The blinking lights and mechanical whirring are gone. You wonder briefly about the man, wonder if he’s packed up his stand and moved to another poorly lit mall, maybe this time setting up next to the pretzel shop far away from the squeals of too-young girls getting their ears pierced. Maybe his wife gave birth to a little boy, and it was time to get a real job after all—a grown man can’t be playing with toys all day. Maybe he met the life-sized version of his little red Mustang in a flaming burst of inertia and speed, and his heart exploded against his ribcage as skin met metal. You wonder these things, and then you don’t, distracted by the woman trying to streak Dead Sea salt-infused lotion on your arm—this will really help with those unsightly pores, and just feel how rich that is! That’s the healing power of the Dead Sea. You walk on, propelled by the pulsing tide of the crowd, empty as the dust-soaked air above your head.

Molly Howard hails from a distant flatland of swamps and cotton fields. She attends school in North Carolina where they teach her how to read books and watch birds. She is 90% English literature, 10% rainwater, and 1% terrible at math. Find her in the middle of the woods or on Twitter @mollyjhoward.