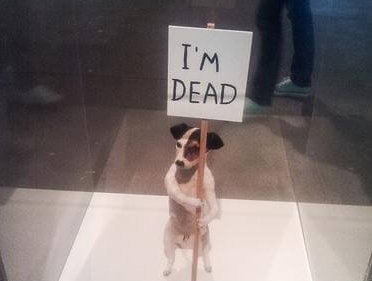 Pedro’s dog killed two of the neighbor’s pigs and so it was agreed that it had to die. But nobody could agree: should it be shot, poisoned, have its neck snapped. As his parents and the neighbors argued about the proper way to kill the animal, Pedro took the dog and wandered into the hills. It was summer. How those storms do ravage the Caribbean.

All night it rained and the hills flowed with mud so that Pedro and the dog took shelter in the hollowed remains of a fallen tree. That night Pedro slept, his dog trembling and curled up at his side, feeling its cold tongue rub against his cheek. Then morning, humid. Palm leaves littered the hillside or posed in favor of the winds. Pedro waded through a runoff channel and entered another pueblo; he’d never visited this side of the hill. There was a boy, shirtless, his body blistered, oozing, walking a red and yellow yo-yo along the remains of a demolished home. The boy seemed to like the dog and the dog the boy. Settled. The boy, grateful, offered his yo-yo. But Pedro did not accept the toy; he simply asked the boy to take good care of his dog and to feel better. Pray to San Lazaro, the boy said. I will die. But you can pray to him. And maybe that will matter.

Two days later Pedro returned to his family; he’d not taken the hill, opting to follow the campo’s roads. When he stepped through the front door that morning, his mother removed a chancleta and held it above her head, his father undid his belt, and they struck at him in unison until he fell to the ground and cried.

“You think you’re so noble,” his mother said. “Saving your dog. Come,” she said, grabbing his ear, twisting, and pulling him up and outside to a nearby field. “Look,” she said. Hanging from a palm tree was his dog, its limbs bunched together and bound by the twine from the sick boy’s yo-yo, the dog’s ears and throat nailed to the bark of the tree.

Somehow his mother had located the dog. She’d followed him or she’d consulted with the local botanica or dumb luck, who knows? Here the dog would desiccate until the seventeenth of December, forgotten by everyone except Pedro. On that holy night, he’d rip his dehydrated dog from the tree, stuff it with rose petals and feathers and the blood of pigs, sew it up, and he’d sneak off to the shrine of Babalu Aye. Pedro would kneel before San Lazaro, pray
to the bleeding statue, leaving his dog behind as an offering. He would pray for the boy, ask for his health, promising to return to San Lazaro on the 17th of each year.

That night Pedro wouldn’t sleep. He’d regret praying for the boy—the same boy, he’d realize, who’d given the dog to his mother. Deep into the night, Pedro would blame the boy, sneak out again, walk to the candle-lit shrine with his mother’s broom, and split the saint’s head in half, leaving nothing but an iron rod sticking out from its neck. Nobody would see him as he’d carry his dog down the street, to a nearby stream, letting the water take his stuffed companion away.

He’d then sneak back into his house and try to sleep. But he’d feel watched, and so he’d struggle in and out of sleep. And upon opening his eyes and glancing out the window, he’d lose his breath, swearing he’d seen the boy and then the face of that old saint, white beard blowing in the wind, eyes staring intently. But then there would be nothing except darkness and the sound of the screen door rasping in the wind like the chirr of a man walking on crutches.

Raul Palma is a first year PhD student at the University of Nebraska-Lincoln. Winner of the Soul-Making Keats Short Story Prize, and a four-time finalist in Glimmer Train Press contests, his work has appeared or is forthcoming in Saw Palm: Florida Literature & Art, The Cossack Review, Penduline Press, and elsewhere.  He lives with his wife and daughter in Lincoln, Nebraska.