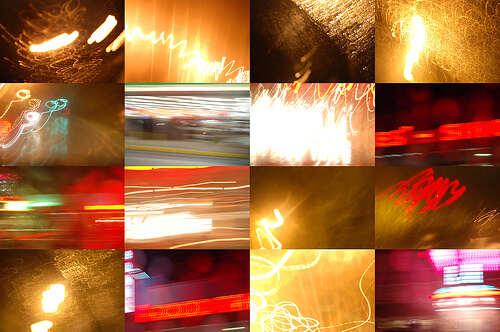 how at night when the lights inside the train are fluorescent yellow-green, noise a loud fridgebuzz she tries instead to hear the dark water, to balance but the city is color electric neon—the hummed static pulsing further away and she understands the way a charge moves through the air in the meeting of their two bodies but not this afterwards, the pressing of a thing into the shape of something else.

how always, in the fall of rain, the city is a solid charcoal mass of ink, winter blue wild sky and yellow moon reflected onto silver lines she rides. she has trouble with transitions then, the separations. she would think us i you. she would think molecule, atom, particle—understanding the many ways of ending, the many tiny cuts before the last separation, whole, else she would fall in suspended water, colors. she would rest there, sinking cold and faded as the city’s color slid into dark water, to drown, pushing back to form. to dark and light shapes, soft against grey sky. and in the pulsing fall of light dragged across water rippled dark as after sex shadows spreading between two bodies. as thunder follows. she knows she should be scared, high above fenced by repeating triangles of iron so she presses her face to cold window trying to find the movement of water through sky and landing, the mark of impact eddied out in tiny ripples quick erased in the return of water to form until, in feeling the weight of something else water spreads softly open—slight, slow, again.

Hope Wabuke runs a communications company called The WriteSmiths and serves as a founding Board Member, and Director of Media & Communications for the Kimbilio Center for African American Fiction.  She’s the recipient of fellowships from the Voices of Our Nation Foundation (VONA), The New York Times Foundation, Cave Canem, and the Starworks Foundation, and was the First Runner-up in Bomb Magazine‘s Inaugural Fiction Contest.  Hope’s work for the stage has been performed at the Kumble Theatre, Joyce Soho Theatre, the White Wave Dance Festival in Brooklyn, New York, and the Stage Left New Works, New Plays Festival in Chicago, Il.