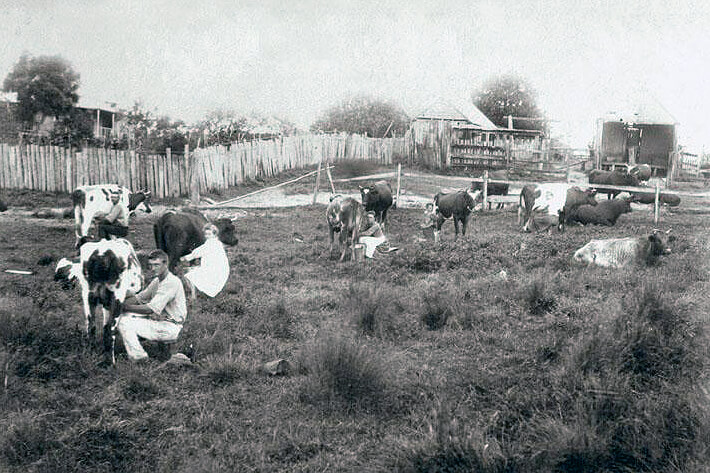 Sometimes at the end of a long day, the farmhands like to sit around the fire and reminisce about all the cowtastic, whip-smart work that’s rolled into our poetry and flash fiction pens over the past six months.

We were doing just that the other night when we all began to notice that the cows got to mooing whenever we mentioned certain pieces that had come through the farm.  We all agreed that they were trying to tell us something, and just then, a handbill came rolling through the pasture like a tumbleweed out of the 8th dimension!

Don’t you know that it was a call for us to send in our nominations for the Best of the Net 2013 awards?! Those cows sure are tuned in to the universal antenna!

So, we called out the titles of all the poems and flash fiction pieces we published through the June 30th cut-off, and waited to hear that sweet sound come from our bessies out in the pastures.  Here’s what they chose.  Could we have a little cowbell, please?

“I’m Being Stalked by the Avon Lady” by Nancy Stohlman, posted on May 28th

“At the Empyrean Ensemble Concert, 2009” by James Tyner, posted on June 13th

“If I Were a Cowgirl” by Laura LeHew, posted on June 12th

“The Prettiest Woman in Lucy, Tennessee” by Corey Mesler, posted on June 27th

“An Armed Man Lurks in Ambush” by Howie Good, posted on May 23rd

So, there you have it, the cows have spoken, er, mooed…

I highly suggest that you acquaint (or re-acquaint, as the case may be) yourselves with these fine bits of writing by clicking on those titles above to let the magic of the internet take you to the original posts at Cease, Cows.

We’re awfully proud to have featured these talented folks in our humble magazine.  Congratulations to all our nominees!