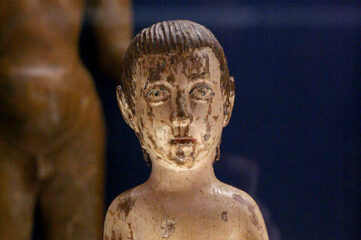 I arrived home to find a six-foot high wooden statue of myself on the front lawn.

“I couldn’t think of what else to get you for your birthday,” she said. I sympathised. I always have the same problem with her.

“He works from photographs. I took them while you were asleep.”

We stood for a while, trying to avoid staring.

“Perhaps you were dreaming of something?” she said, breaking the awkward silence. “Something, you know…”

“Maybe.” I shook my head. “No, it’s going to have to go. What about the neighbours?”

She gave a sad smile. “I guess you’re right. Hold on.” She disappeared back into the house and returned with a saw. It didn’t take her long to remove the offending item. “Do you want to sand down the stump?” she said when she’d finished.

“Fair enough.” She paused for a moment. “So what are we going to do with this bit?” she said, holding it up.

We’ve ended up using it as a light pull for the downstairs bathroom. So far, none of our guests has made any comment, but I guess it’s only a matter of time.

Jonathan Pinnock has had over a hundred stories and poems published in places both illustrious and downright insalubrious. He has also won a few prizes and has had work broadcast on the BBC. His debut novel Mrs Darcy versus the Aliens was published by Proxima Books in September 2011, and his Scott Prize-winning debut collection of short stories, Dot Dash, was published by Salt in November 2012. He blogs at www.jonathanpinnock.com and he tweets as @jonpinnock.