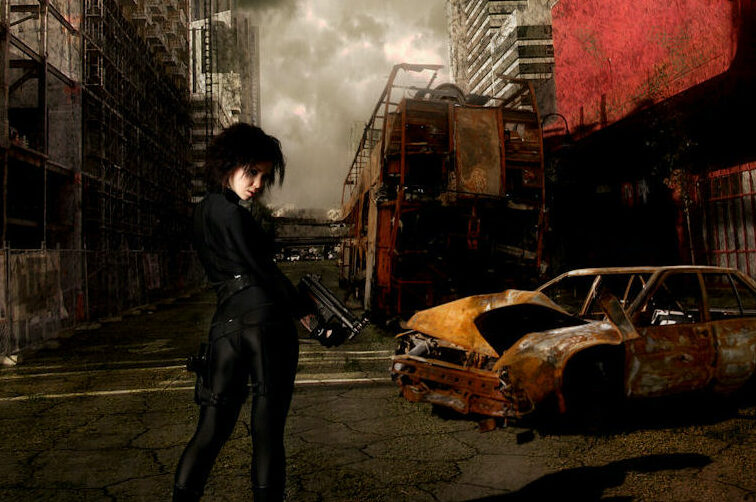 In a penthouse suite, Nadia and I sleep together for the first time. Morton is out on some silly quest to raise hell. We have good pot, great booze, and not a soul to disturb us. She melts over the bed and I go in search of her secrets.

As I pull her panties away she tells me the last thing she wants to do is try to repopulate. That we three survivors of this rapture are not part of some grand plan for humanity. She says this city is not Noah’s ark.

“If the race is pinning hope on us,” she pauses a moment to smoke. “Then it ain’t lasting. The world is ours and honestly, all I want is to be as selfish as I can. Is that so bad?”

I lower my head and lick at her so I don’t have to answer.

When I take off my jeans and kick off my socks, she tosses me a condom. It feels heavier than it should.

We know the risks of staying in the city.

Yeah, yeah. The animals will get brave and come looking for food then a power station will blow and set the sky aflame and torch the very air around us.

Really, we should head for the country. Hole up on a farm and become self-sufficient. Then search. Gotta be other survivors out there.

How boring. The countryside ain’t for us.

Here we can loot the houses of dealers we used to know, and hit supermarkets for booze. We don’t need a plan for the future of the human race, just for the future of us. It’s been a non-stop party since everybody died. Nadia and I will fuck the years away and Morton seems happy as a pig in shit with a city for his playground. He always did like cars more than he liked girls.

We can be young forever and we’re loving it.

Ahead, the world drops away. Deacon Hill is the steepest in the city. In winter, people had nightmares about driving it. God help you if you had to stop halfway up, or worse, halfway down, on a frosty day. So many times folk’d slip out and shunt down the line, starting a chain of broken bumpers and littering the gutters with shards of shattered headlights. The grit they spread around never made a gnat’s ass of difference; most of it ended up in drifts down at the bottom. Each year there was talk of closing the road when the heavy snow came, but to the best of my knowledge they never made good on the threat.

Nobody but us out here today, though. Only one motor running up here–our cherry-red Mitsubishi that Morton took right out of the showroom. One mean motherfucker of a car. It looks like a star-fighter.

“What kinda odds you givin’ me here?” Morton says. “Better or worse than me actually being alive to try this?”

Something I’m noticing–the view from up here is superb. The world is a beautiful place sometimes. Right now I have a head full of dope-haze and eyes full of sunrise. We’ve been up all night. The entire city is sprawled ahead, and I can even see the glimmer of emerald fields, way out beyond the city limits.

“Say, you lovebirds wanna get in? Gonna be quite a rush.”

Morton guns the Evo, taking us over the crest of the hill, and there’s a rollercoaster track ahead. Either side of the decline, Morton has built barricades. He’s parked others cars at ninety degrees to the road, positioned to block parts of the course.

We reach what seems like warp speed. Nadia hands me a joint, and it’s tough to take a hit through the inertia and the force on my body.

What’s also hard to swallow is how much I’ve been lying to myself.

The bodies don’t seem to faze them. Content with a world their own way, they don’t care how long they have it for. When Nadia finds a dead guy, she kicks him aside and thinks nothing more. When I see him I think rot and bacteria. How filthy this place will be before long. I think, what happens if one of us gets a broken ankle? What happens if one of us gets sick? It would only take a gallstone or appendicitis.

Right now Nadia cares about one thing–Nadia. She’s high on pills and a seventy-miles-an-hour-and-counting descent.

Maybe it’s just her way of coping, the only way her brain knows how to get through this. She turns every waking second into a drug.

I was wrong to ever think she and I could make it.

We’re not the same.

She isn’t thinking like this. About how one wrong move from Morton will send us spinning hard into a lamp post. About how difficult evading the packs of stray dogs will be when our legs are broken from car crashes. About how it will feel when a bull terrier gone feral makes dinner of our limbs.

I don’t want to wear a condom when we sleep together.

I call for Morton to slow down, to stop the car. He doesn’t hear so I scream white rage for his attention, until he steals a glance at me and his hands slip on the steering wheel.

Martin Garrity hails from Mansfield, England. He is an author and avid fan of dark fiction and a heavy metal disciple. He is a co-editor of Solarcide.com and the anthologies Solarcide Presents: Nova Parade and Flash Me!: The Sinthology. He is currently working on his own debut collection, to be titled Corridors.