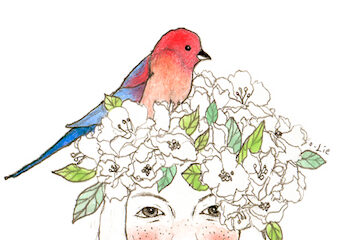 1. In Jeremy’s recurring dream, she is sitting at an antique vanity made of cherry wood like the one his mother has, wearing a simple flower-print dress and twisting sections of her glinting auburn hair up onto the top of her head, making silky nests for the small, speckled birds’ eggs scattered carefully on the gleaming hardwood before her. Jeremy always notes – in a distant, non-questioning sort of way – that though the overhead lights are not on in the bedroom, she is bathed in a soft light that seems to emanate from the vanity before her – the sort of glow made by fireflies and deep sea jellyfish – despite the thick shadows on the edges of the room threatening to overtake the low ceiling and embedded bookshelves. The colors in the room are also bizarre, especially what appears to be a blazing chartreuse on the walls: everything is hyper-vivid but muted, like black-and-white pictures of events Jeremy can recall from memory.

Every time, as he walks forward slowly, trying to figure out exactly what she’s doing and how she’s doing it, she turns when she sees him in the mirror, her slender arms above her head. “There you are,” she says, like she was about to come looking for him, like she really was wondering, like she’s relieved he’s arrived. Then he sits on the corner of the bed he somehow knows is theirs and watches her: she goes right back to her hair, naming each colorful egg’s species for him, each more exotic than the last, more delicate, more fanciful. She takes each one softly between two long fingers, names it with a smile while holding it in the air, and then tells him about how that particular bird nests in woven pendulums that hang over the rushing Amazon river, or has feathers used for generations in the crowns of kings and clothes of shaman, or that they eat only insects from the island of Madagascar.

2. She is riveting, engaging, as intelligent and articulate as he could hope for his children to be, more beautiful than he deserves – he has no qualms admitting that, his sweaty palms clasped as he scoots further back on the mattress – even in his dreams.

The woman – though she does not feel quite as young as his waking self, Jeremy knows that here they are peers – speaks expressively, moving subtly, in such a way that her luminous hair does not topple down her shoulders, but so that it seems like twisting and weaving nests in her hair is the most natural and incidental thing she could be doing – like she could stand up and walk away from it at any moment without any regret at all. But Jeremy knows this is not so as he watches her smooth jawline, dark brown eyes – and he realizes again every night that this way of acting is something he likes about her, has always liked about her – because on some level he knows that her task is nearly sacred. He finds himself awed and honored to watch her.

Whenever he mentions any of this to her – the impossibility of what she’s doing, or her mystifying success at her task, or her intelligence or slight whimsy or easy attitude – her mouth curls into a smile as she looks straight into his eyes and tells him he’s being ridiculous, her eyelids relaxing coyly.

3. Jeremy has tried to describe her to his friends, but it never quite makes sense – weaving eggs into her hair, glowing as she waits for him in a shadowed bedroom painted ridiculous colors – so he also tried to recreate her for his friends – painting and drawing her – but the patterns on the eggs were always too predictable, too common, the colors were never right, and Jeremy was never a good artist anyway. And since he lacked her intimate knowledge of each species, her task always came out sounding absurd – why would someone dedicate their time to something so fragile, so curious, something so few people could care about?

He never had answers, only the looming fever of obsession in his eyes, so his friends – who were beginning to pair off and get married anyway, have kids and take more time to themselves – stopped asking if he kept having the dream and he stopped offering up details of the time he spent with her. Now he calls them less, forgets details of their lives he has known for years, is surprised when they ring on his birthday – his roommate remarks that he only sees Jeremy shuffling through the apartment in his robe, always on the way to his bedroom.

4. Jeremy has started napping, determined to catch more glimpses of her – perhaps if only half-awoken as his roommate comes home for lunch – a chance to speak with her the way he wants, to break out of their repetitive interactions. He is usually too excited to fall asleep – cannot stop concentrating on her long enough to let go of the idea and have it drift back to him – but he develops a routine that he makes into habit, showing up at the side of his own empty bed each day at noon-thirty, having requested off every afternoon every day from CVS after telling them he has developed a sleep condition.

The napping has worked only once, allowing him to glimpse her outside their usual situation – it was fleeting, nothing like he’d expected. In that dream – in the visceral, concretely vivid way of dreams experienced during brief periods of sleep – Jeremy had realized that he was walking up the hallway stairs of what he knew was the same small, rather plain house, intent on finding her throaty laugh and mocha-brown eyes. Seeing their wedding photo hanging at the top of the stairs, he had glimpsed memories as they washed through his mind: her smile as they danced at the reception, the hilarious and sincere speech his half-drunk father gave, the way she had looked into Jeremy’s eyes when she said “I do.” When Jeremy had peeked into the master bathroom, she was wrapping herself in a towel, still dewed with water from the full bath – that long brown hair made dark by the moisture, snaking in loose coils around her face. She had looked up immediately, straight into his eyes, and smiled crookedly.

“Jeremy.” She had shaken her finger, laughing. “You’re not supposed to be here.” Then she’d stepped forward, playfully tossing the door shut.

When he’d opened it again, she was gone – the towel rehung, the bathtub dry.

5. He has not returned his mother’s last three phone calls, and when his sister brings her twin boys over to make sure he’s okay, he tells them he’s sick, that it’s contagious and could be dangerous for the kids to catch.

“What is it?” his sister, whose name is Ashley and who never fully believes what Jeremy tells her, asks through the crack he has opened his front door.

“Shingles? Strep? Why didn’t you call me and tell me not to come, then?” She tries to push the door open more but his foot is wedged behind it. “Come on, what’s going on?”

Ashley finally shrugs, tells him to call their mother, and says she wants to see him soon. “You didn’t even come over for your birthday like you said you would,” she says. “We were expecting you.”

Ashley places a hand on the back of each boy and all three of them turn and walk away from his apartment’s front door. Jeremy pushes it shut and flips the deadbolt.

6. Tonight, in the middle of the dream, Jeremy realizes for the first time where he is on a very conscious level. ‘Shit,’ he immediately thinks, ‘it’s real this time.’ He focuses on the familiar surroundings, noticing things he’s not before – his mother’s initials on the top vanity drawer, a portrait of a man he understands to be her father on a bookshelf, the silver and amethyst ring he gave her for their tenth anniversary on her index finger, a picture of them together, smiling widely at a picnic with three children he knows are theirs. Jeremy sorts questions for her in his head, silently as he observes, so as not to end the mesmerizing activity in front of him: the parade of delicate colors moving through her hands, the soft light on her hair that makes it show brown to red to gold as she speaks or turns to him with a patterned eggshell between her fingers, the glint and sparkle in her voice when she finally places the last spotted egg in its pillowed nest.

He asks why she’s appeared to him, where they found each other, why she chose him, and she laughs as she turns slowly to him, leans forward, says, “You’ll see, you’ll see.”

Austin Eichelberger completed his MA in Fiction at Longwood University in May 2009. Since then, he has taught various English and writing courses at a university level, though his most recent (and proud) accomplishment is co-founding the online literary and art journal SPACES. His work has appeared in several anthologies and journals, including Flash: The International Short-Short Story Magazine, Diverse Voices Quarterly, and Eclectic Flash, among others.