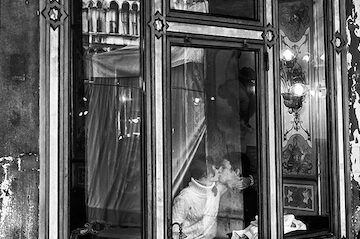 The girl with cystitis leaves the library corral, crosses the street to her boyfriend’s apartment. Each person is in their own world, she thinks, neatly excluding herself. Later, she’ll torture him, weeping in pain, and make him trek in the snow to the all night pharmacy for her prescription. Forty years later, she’ll look at him across a small table in another city, a different country and admire his still narrow face, his fastidiousness against unkindness. Although now at the age when a cool breeze of disintegration, as if from a newly opened door, blows across the self, they stand on the balcony in the evening as a small band of protesters marches below. She still approves of the young, though having long outgrown that membership, and looks with a pleasure that isn’t envy at the red-headed boy so intently kissing the dark girl’s face in the window of Amir’s Lebanese falafel restaurant.

Miriam Sagan is the author of twenty-five books, including the poetry collection Map Of The Post (University of New Mexico Press). She founded and directs the creative writing program at Santa Fe Community College. Her blog is Miriam’s Well . In 2010, she won the Santa Fe Mayor’s award for Excellence in the Arts.