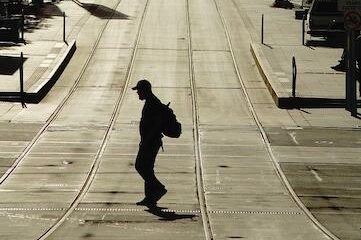 The trucker drives long hauls, overnighters that pull him away from his family. His toddler knows him as a hug and hair tousle, then a sleeping mountain, and mist after two mornings. The trucker delivers plastic trinkets to dollar stores. Chip clips, slinkies, soap holders. He sleeps in a compartment behind his seat. His blanket, a plaid jacket. A photo of his toddler tucks into his mirrored visor. He stares at it when he eats Vienna sausages from tiny tin cans.

He never thinks his life is meaningless. He listens to talk radio all day and thinks the free market is the best. USA is the best. He barrels by homeless people panhandling on city corners. They hold grimy cardboard signs and watch for signs of change coming their way.

The goods he delivers to the dollar store are unboxed, stickered, and stocked on the store shelves. A toddler and her single mom hustle through the store. The toddler sees a Slinky and cries until her mom buys it. In the parking lot, it drops from her dimpled hand.

h. l. nelson is Founding Editor-in-Beef of Cease, Cows. She is also a former sidewalk mannequin. (Yes, that happened.) She has been published or is forthcoming at PANK, Hobart, Metazen, Bartleby Snopes, and Pure Slush. Tell her your favorite planet: hlnelson.com.